A word came up, quite potently, for me when I was writing my last post and, though I don’t have a huge amount to write on the topic, it feels too important to pass by in the context of healing and otherwise altering your life for the better or achieving a paradigm shift. So I’m just going to let it flow this morning, while I’m still half asleep, and see what comes out.

What I sense is that, when you get started on something new, right after you’ve taken some sharp turn in the road and its going well, even to your own surprise, the absolute key to taking it further is momentum.

In fact, I would almost say its more important than anything else, because momentum is a very particular kind of energy; one that will fuel your new project with resources you didn’t even know you had (probably even doubted you could ever have…) until you unleashed them. The feeling of bringing these resources unto the surface, of seeing them in action and witnessing their transformative effect is astonishing; like observing a minor miracle unfold. I confess, I’m still reeling at the alteration of my life’s landscape from one version into something quite different in just a few short weeks since I got my own new momentum going by pushing through my fears and starting some new activities, with one thing then leading onto another (another effect of momentum).

Closely related are those other things I’ve talked a lot about lately – enthusiasm and excitement, plus something else…a kind of daringness or courage that seems to grow out of the first two, once their taper is lit. These things work together like a stepladder to the stars of possibility.

Lets look at the dictionary definition of momentum here (I haven’t yet, or not for a long time)…

In physics terms, it is “the quantity of motion of a moving body, measured as a product of its mass and velocity” and in plain everyday speak it is “the impetus gained by a moving object”, example given “the vehicle gained momentum as the road dipped”. Its origin is the Latin word “movere” – “to move” from “movimentum” – “movement”.

These are important words – “movement…to move” – if you are looking for a shift in your life, including “to heal”. How long have you asked for something to shift, thinking you needed something outside of you to come and rescue you? Well, here it is and its you rescuing yourself, which is important; the very pivot-point of your transformation as you start to believe in yourself again…yes, you did this thing, you made it happen!

And, if you know your physics, you will remember how, once that thing gets momentum going, its own mass starts to push it along….yes, like there’s a dip in the road making it easier…you don’t have to become the heavyweight champion here. Just by setting that first intention in motion, its as though a dozen “pixies” with brawn turn up and start to carry the whole thing along towards where you are pointing.

Losing momentum somewhat, this week, because three of my new activities got cancelled and because I had also planned a few quieter days (as per my old routine) “to recover” from a long weekend away has lost me a bit of momentum and its been interesting to observe. How quickly did I slip back into old feelings, self-doubts and the propensity to cast my shining successes of recent weeks in conditional or even slightly tarnished colours! Within a few days, I was almost talking myself out of my new routine and, when it came to pushing my boundaries once again in the way that became a breeze in January, I almost lost my nerve.

Because, what I found was, the more I dared to leap, the easier leaping became and the more confident I became to make those jumps into new situations that have served me astonishingly well in record time. This has involved incredible feats of courage (for me, the introvert who is severely out of practice in a social setting) such as walking into group activities with anything between half a dozen and two hundred people in them and taking my place to join in, introducing myself, chatting, the whole lot. Once I had got over this the first time, which was done on a sort of New Year knee-jerk impulse, it became easier and almost addictive, the high of one success fuelling the next.

Just a few days’ loss of momentum and I found myself cringing at the thought of attaching myself to a new walking group tomorrow because my usual one had been cancelled, which was one of the first things to flag up that momentum is just so important…I had ceased stretching my boundaries for a few days and now, well, the pushing against edges just got harder again. In the light of this, I almost feel there is divine orchestration to the fact my group got cancelled because I needed this chance to push into new territory once more; I needed not to become complacent and all-too comfortable so soon. In fact, its made me realise just how important having constant boundaries to push against is going to be in this phase of my life and has convinced me I need to orchestrate for those challenges to be there along my path…and for me to step up and meet them for my own personal growth.

I know, quiet people often flinch when you describe pushing but this has nothing to do with being pushy. What I describe is that gentle push-off that gets the bicycle going the first time the adult lets go of the back. Its a momentous thing that you need…to get yourself started and, in doing it, you’re showing immense amounts of self-love and, yes, faith…which is so important, Without it, you’re going nowhere new.

Sometimes you just have to believe you can and let the rest take its own shape in its own way. The thing about momentum is not to overthink it, nor overplay it…just to decide and then do it, keeping fear out of the picture. That was how I was the first time I went to choir: I made the commitment while I was so excited to do it and then shoved all conscious thoughts to one side for the three days before it was time for me to turn up. When those bubbly feelings came up in me, I interpreted them as excitement rather than fear and stuck to my plan, having made it for all the right reasons (as checked with myself before I made that initial commitment, so there was no need to review). I kept my monkey-mind out of it, even at the last moment as I went out of the door into the dark evening and parked my car outside the building with all these strangers herding through the door…and the rest, as they say, is history. What happened next far exceeded my expectations and has helped to shift a paradigm. 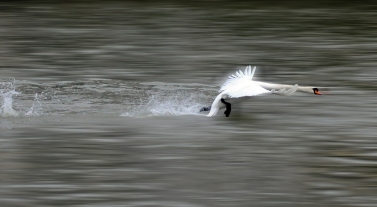 So whatever you are trying to shift, my advice is, don’t stop too soon and don’t build in too many pit-stops until you are well into it. You can always make excuses if you really have to; but at least give yourself the option to continue exercising this new “muscle” continuously until you have the hang of it. Even if you are someone who gets easily fatigued by social contacts or new activities, don’t assume that this will necessarily be the case. There’s an interesting thing that I’ve noticed about getting momentum started: you kind-of develop super powers and its as though normal rules of fatigue and recovery don’t apply. The excitement that is fuelled by the very act of gaining momentum is its own source of self-replenishing energy and not only will it provide all you need to get through this new phase and those things you have to learn or remember how to do but it will start to provide resources (and a kind of glow…) to other areas of your life. So, don’t be surprised if the new flush of energy generated in this one quarter starts to resuscitate several areas of your experience, most especially your health.

Meanwhile, during the inevitable slow-downs in momentum (some things can’t be helped) Ive noticed the best thing I can be doing is not slipping back into the mindset of who I was before this new phase got started. Rather, I’ve started using the time to concertedly notice how those traits which also make me the quiet person, the one who didn’t do these things for so very long, are powerful (not flaws) and have undertaken to study them and become the expert at them, assuming this very thing. So, Im spending time getting to know those particular traits, such as exquisite sensitivity, deep intuition, the ability to work with energy, and to be the quiet observer, deeply noticing things that others miss, seeing patterns, beauty and so on. I’ve worked with these traits for a long time but never so unreservedly or cast in such positive light, relishing the time to practice them in ways that replenish and support me. Then, when I get the chance to put these subtle skills back together with my more outward life, they click together to make a much more complete and coherent version of me than ever before.

What I’ve realised is that it doesn’t have to mean replacing one way of being with another…its a case of both, together, as the best of both worlds. This can take you off into a whole new momentum…of modelling wholeness to yourself and to others; the inner and the outer, the introvert and the extrovert, the considered and the spontaneous, the deep and the frivolous…etc. The result is that you get to achieve a deeper sense of wholeness than ever before, which is the very root of healing…if this is your aim…and a powerful means of balancing your life to incorporate more facets of who you are. Yes, its a powerful thing, this momentum!